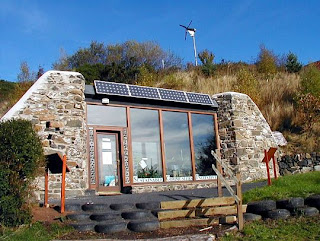 I watched the movie Garbage Warrior a while back and have since been become increasingly interested in sustainable green living. Particularly in Earthship home designs but also looking at other ideas like underground housing as well.
If you are not familiar with either of these I urge you to take some time to learn about them.
The basic idea of both designs is to use the constant temperature of the ground to keep your home at a livable temp year round with very little if any supplemental energy usage for heating or cooling. A utility bill reduction of 75% is not unheard of and quite a few are completely off the grid.
They also incorporate ideas like greenhouses inside your home to grow fruits and vegetables and reusing water from sinks in your greenhouse. Most also incorporate water catchment systems to capture and use rainwater.
The sad part is that from what I can tell there is virtually no investment into these technologies. Just a handful of people building houses to test their theories and tweaking designs along the way in order to improve them. Not only that but they are having to fight building codes all along the way just to be able to experiment.
So at a time when our politicians are telling us we can no longer keep our houses at a comfortable temperature and that utility bills will have to be increased in order to force us into saving electricity we have a few rebels having to fight the system to provide people with a low cost alternative that will allow them to keep their house at a comfortable temperature and drastically reduce the amount of gas/electricity that they use. At a time when in many parts of the country we have restrictions on how much water they can use we have people building homes that will capture rainwater and use it for household purposes but they are having to fight the same governments all along the way.
Those of you that read the blog know that I am about as far away from an Al Gore type as you can get, in fact I think global warming is a hoax.
I also know most people pushing this technology are on the opposite end of the political spectrum from me but that really doesn't matter.
The fact is that this technology makes sense, I am in no way saying that we need laws mandating these ideas but I am saying that this is supposed to be a free country and if a man wants to build a home like this he should be allowed to do it.
I am also saying that if our politicians want to tell us we need to be green they should take the handcuffs off and let us be if we want to be.
Would the earthship not be a model for public housing ? People without homes could build a home themselves and grow a good portion of their own food. Why not take the areas of cities like Detroit which are vacant , bulldoze the old homes and let the people build their own and take care of themselves ?

Think about it , a home that is paid for because it was built mostly by the owners labor, that provides 50% of your household food from the greenhouse inside and has a utility bill reduced by at least 75% , is that not the American dream ? If not maybe it should be. I see no reason why liberals and conservatives don't get behind this movement and together force our politicians to do something about it. Now that would be true bipartisanship.
Posted by secretary at 1:51 PM No comments: