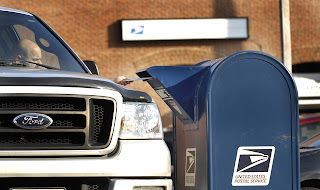 In the wake of the USPS saying last week they will need a bailout to survive I thought I would share a recent experience.
I was at my local post office dropping off a handful of mail at the outside drive-thru box. There was an employee with his head inside the back of the box collecting mail so instead of dropping it through the slot and onto him I reached out further in an attempt to hand it directly to him. The employee went into a near panic exclaiming "I am not allowed to take mail directly from customers , you have to put it in the slot." My initial reaction was that this was a joke so I smiled , almost laughing and extended my hand out further to hand it to him. The employee looked around several times in all directions , then sheepishly took my mail and quickly put it in his box. No doubt he broke some union/government regulation in the process.
Now you may read this and think this is just a funny story , I disagree , this is a small example of the cancer that unions and governmet regulations have brought to hundreds of companies that are now "to big to fail" in reality all of these companies are too regulated to succeed.
Posted by secretary at 2:56 PM